I will skip the $\epsilon$-greedy algorithm background introduction, and focus on the algorithm implementation in python.

In a stationary probability distribution of k-arms environment, a bandit was chose for each step. The purpose of chosen is to maximize returns in long run, with e-greedy, a threshold of $\epsilon$ will be set to determine how to make choices:

We are making a balance between explore and exploit by setting an appropriate “$\epsilon$”. As in 2nd scenario, there’s really nothing to do with random selection, we will focus on how to calculate out max historic average rewards, aka:

Basically this is the simplest version of e-greedy, in order to make it computational effective, that is avoid of recording and accumulating actions and rewards from each beginning, the previous formula could be transformed into:

And till now, the derivation is perfectly done, on calculating each Q, we will only need 2 parameters: the number of selections “n” and the current reward R.

There are 3 objects in MAB problem, each with different responsibilities:

Here will be nice to have a diagram to indicate relationships between this 3, will try to get one later.

Following are the results of the code: 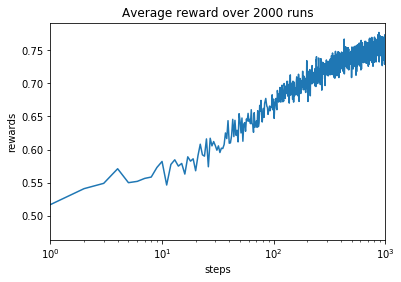 There’re couple of time I was explaining e-greedy to people without using formulas.Here’s a simple version I used:

Assume you were in a gambling house with a bag of chips, you were playing with 6 slot machines, for each machine there was a bandit, every time you feed it with a chip, and it gives certain reward or zero.

You don’t know which machine is your lucky one, and for sure, the target is to gain maximum rewards after a period of time.

Here’s the called e-greedy approach, that likely will make you gain some money:

You will need a pen and a piece of paper, and a dice. You start with pick a random machine by rolling the dice, and maintain a list of average rewards of each machine. For e.g. machine No.6, total selection: twice, reward once, so average reward will be 1/2.

For each time, you spend the chip on the machine returns with the most reward, if there are more than one machine satisfies the condition, then pick up one randomly among them.But wait, prior to inject the chip, rolling the dice, if it gives you with “one”, then rolling again, and pick the specified machine according to the number you get on 2nd rolling. If the first rolling returns with a number between 2 and 6, then stick to select the machine with highest average reward.

The selection to the one with highest reward, was called “exploit”, to utilize current reward bonus. The procedure of “random choice”, when rolling with the dice and got the number of “one” or any other specified number, was called “explore”, is to give opportunities to other options.

Life is a balance between explore and exploit.

And they said there are 2 type of people: the explorer and the settler.