Matrix multiplication why and how

Why matrix and its multiplication is so important in neural network

In the previous post of xor problem, we introduce the network of 2 inputs nodes, 2 hidden nodes and 1 output as the following:

We calculate the values of P1 & P2 as following:

The linear functions is exact the format of matrix multiplication as following:

Every matrix represents some linear function, and every linear function is represented by a matrix. That’s the strong connection between the linear function and matrix. In linear space, matrix multiplication represents linear transformation, i.e. a movement in space. The first matrix {w} means movement, the second matrix {L} is the basis, the third {P} is the new location.

So in linear space, the network represents through a set of transformation, the original input outputs the result we expect to, either classification problem or regression problem.

Matrix is a perfect tool for neural network computation. Let’s say the network now goes to 4 hidden nodes as below: 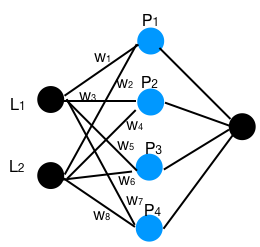 Without the magic matrix, we will need to implement the values for P1 to P4 in 4 functions manually:

When network grows to thousands plus in real practice, the linear function grows accordingly. While with matrix multiplication, the piece of code remains the same:

As matrix is widely used in machine learning, there are good amounts of existing libraries about matrix operation. Below is the matrix multiplication in processing, as we really want to build a neural network from scratch, we implemented a simple matrix library as well:

This could work in demo usage, while if we look into the codes, we will find there are nested loop with 3 “for”，the asymptotic complexity is $O(N^3)$ for 2 matrices in same dimension.

How to code in a more efficient way for multiplication